Duplicate candidate applications can cause confusion and significantly more work for your recruiting team.

With Greenhouse Recruiting's auto-merge feature, you can automatically merge new candidates and prospects who are entering your hiring pipeline as duplicates, which should drastically cut down on the amount of manual merging your team needs to do on a daily basis.

Note: Auto-merge does not work retroactively, so any duplicates currently in your account will still need to be merged manually.

on your navigation bar and then click Organization on the left.

From the Organization page, toggle the button next to Auto-Merge Candidates to ON.

Only candidates and prospects with identical email addresses are merged. As such, if two profiles have different names, but the same email address, an auto-merge will occur.

Note: You can see the merge history in the Activity Feed on the candidate's profile.

Here are additional scenarios to consider:

If an email matches two different un-merged profiles in the system, Greenhouse Recruiting will assess the names of each existing profile to see if there is an identical match with the new applicant's name and merge any exact match.

When deciding which criteria to use when combining profiles, Greenhouse Recruiting has identified a number of ambiguous cases where merging profiles seemed like it would cause more pain and frustration than it saved, so we opted not to automatically merge in these situations. For more information on cases where we purposefully do not auto-merge, click here.

Example: If James Henry applies online with an email address that matches the email of an existing candidate named Jim Henry, Greenhouse Recruiting can only choose one name to display for the merged profile, so the name belonging to the older profile (Jim Henry) will be removed and added to the candidate Activity Feed for posterity. For fields that support many entries, like phone number or address, we will simply save everything in a big list and let you decide which one to use later.

Cases where Greenhouse Recruiting will not auto-merge

Greenhouse Recruiting will not auto-merge candidate profiles in the following scenarios:

Note: If you have given a Job Board API key to an integration partner, candidates they import could be merged automatically. Since API works just like your job board, we do not make a distinction between candidates they add and candidates who apply directly. This is an uncommon setup, but one we see every once in a while. You can see which API keys you have given out on the Configure > Dev Center > API Credential Management page.

The easiest and most straightforward merge is done by combining candidates on two different jobs. While we still have to choose candidate-specific information that will apply to both profiles after the merge, all of the application-specific data will be preserved on each profile separately.

Note: If the hired candidate on Job A is marked 'private,' the two profiles will be kept separate.

Note: The logic listed above will also apply to a prospect who matches an active prospect or any candidate.

For Site Admins and users with Job Admin permissions on the job where they are adding the candidate / prospect, they will see the merge warning shown below. If the user chooses not to merge the profiles, no auto-merge rule will be applied, and the profiles will not be merged. 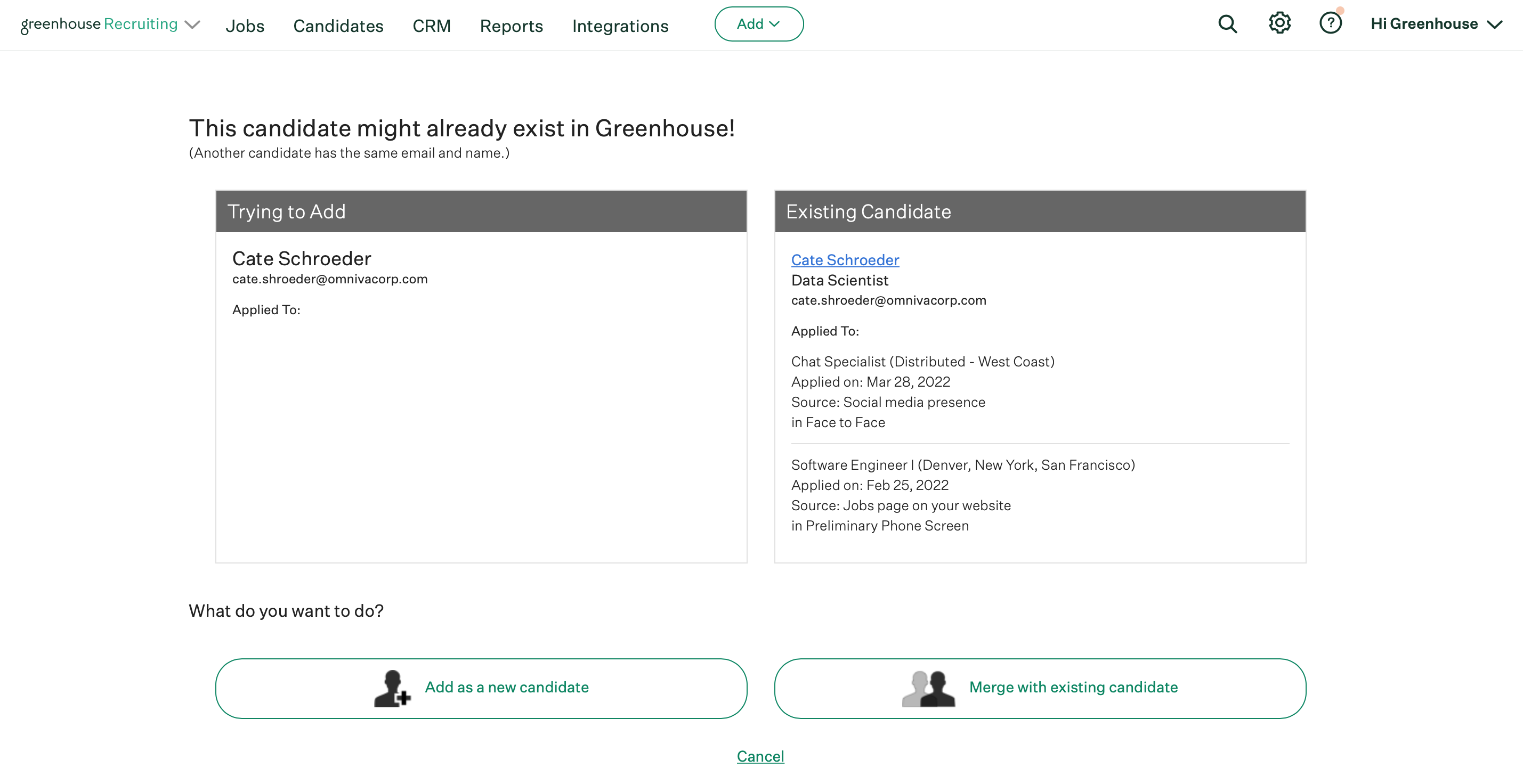